British popular culture collides with the influence of horror films in the midst of the Nasty scandal in 1980s UK.

Oscar Wilde’s The Portrait of Dorian Gray is the quintessential merger of visual art and horror. The classic British tale of a young man and his portrait painting that houses all of his evil doings gets the Italian horror film treatment (and a cravat) in this 1970 movie directed by Massimo Dallamano. 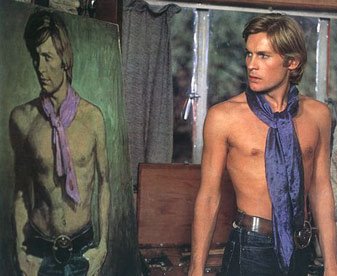 From literature to the theater to the screen. Narrative and meaning shifts with medium changes as films like Frankenstein and Dracula often differ greatly from their book predecessor.

Spending time with ghosts. Simon  Starling using the cinematic lens to evoke the artwork ghosts of Duveen Galleries past for his Commission 2013, Phantom Ride. Past and present converge in this haunting installation at Tate Britain where previous commissions by Pablo Picasso, Chris Burden, Douglas Gordon, Fiona Banner, Martin Creed (amongst others) come back from the “dead” to live again in the 300 foot long cavernous space. This architectural space (designed by Romanie-Walker and Gilbert Jenkins) was the first public gallery designed for sculpture in England when they opened in 1937 and has become a portal from which history emerges into our contemporary lives.

In 2010 I visited The Coral Reef. It is a non-place, a construction, a fictional other-space housed within the reality of an art museum. Non-linear, abandoned, and claustrophobic. Dirty. No other artwork has ever made my heart pound and my palms sweat.

Here is artist Mike Nelson talking about the re-installation of The Coral Reef at Tate Britain (where I saw it).

The history of horror cinema is a complicated web of socio-political narratives combined with the limitations and innovations of filmmaking itself. What Julian Hoeber’s Where’s the Money (playing now on MOCAtv) suggests is that there is a direct correlation with money (i.e. the budget) with the representation and association of the real (in low budget horror films). And that’s an interesting idea. But because Hoeber’s piece is an frenetic and cursory analysis of horror film, it doesn’t really take us where we need to go by diving deeply or succinctly enough into the very important commentary that can associate horror cinema with the real (whatever that really means).

Where’s the Money skips decades quickly, omitting many films in-between that are certainly part of the evolution of the genre; from Freaks to Scream back to Last House on the Left with a curious inclusion of Fulci’s Zombi. Here horror comes off as second-rate, like a bad video-taped porno flick, rather than embodying its position as a vital component to cinema that allows uncomfortable subject matter to be approached and eviscerated right before our very eyes. I find the idea of associating horror with low culture problematic; it’s not merely about economics but the outbursts of social issues that stem from money, and, subsequently, labor and power that makes horror such a potent genre.

What I’m saying is that horror film is infinitely more complex that what’s presented here and that the notion of economy plays out in horror more fluidly than merely in the way in which it’s created. The provocation of money and the real presented in Where’s the Money would have been better served by a narrower focus. For instance, many thinkers associate Eli Roth’s Hostel (2005) as a manifestation of 9/11 Gitmo torture scenarios back upon unwitting American tourists in Eastern Europe. However what’s really at play is the idea of economy and power. There are only two Americans in the whole film, the rest of the people being killed or doing the killing are from all over the world. That film isn’t about “torture and America” but about a globalized system of exchange and an examination of values. Exploring this faction of Hostel (which was not a low-budget film) or in recent films like Land of the Dead or We Are What We Are or even Hitchcock’s Psycho, Where’s the Money could have taken a more measurable stance about how money influences the decisions we make and how horror evaluates those choices.

It’s no secret that Marnie Weber is much loved on this blog so it’s with great excitement that her 2007 16mm film Sing Me a Western Song (featuring another afterlife tale by the Spirit Girls) is available to watch on MOCAtv as part of their West Coast Video series. Includes a personal introduction by Weber to boot!

Ghost in the machine, food footage, and technological fear. UK artist Darren Banks’ (Gods and Monsters contributor) music video for the Stefan Blomeier song, They Have No Place in Paradise.