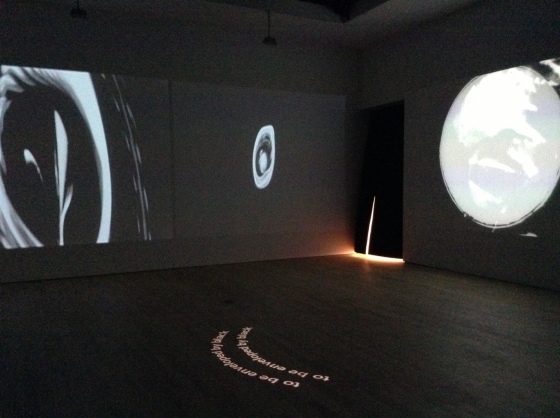 REVIEW: Aldo Tambellini – We Are The Primitives of a New Era: Paintings and Projections 1961-1989 at James Cohan Gallery

For Void is, like Darkness and Silence, a negation, but a negation that does away with every this and here, in order that the wholly other may become actual. – Rudolph Otto

Aldo Tambillini’s We Are The Primitives of a New Era is nothing short of a sensory revelation. An immersive, disorienting, and transformative installation of projections (a configuration of older works in a new arrangement by Tambellini), it feels like entering The Twilight Zone by way of A Clockwork Orange. Six projections of blackness, spheres, and phrases surround on three walls while one overhead projector swirls phrases from Tambellini’s Manifesto Series onto the floor. A static hum permeates the room while bursts of a space-shuttle launch countdown punctuates the space. Formally succinct, the collection of his accompanying paintings depicting the time/space sphere are ridiculously powerful in their simplicity. There is much to process here, none of which is an easy contemplation: origins and future of the universe, the infinity of time. It’s a simultaneously terrifying and promising proposition. In short, the void here offers the thrilling possibility of accessing what we cannot know.

Profound blackness is the beginning of new visions. – Aldo Tambellini

Featuring works from 1961-1989, We Are The Primitives of a New Era is thoroughly of the moment. At the forefront of new media and video in the 1960s, Tambellini thrives in a contemporary environment where the ever-changing advancements in technology dictate how we live our lives. Positioned at a perpetual tech evolvement along with new modes of thinking that contemplate how this technology and blackness shape our socio-political and spiritual lives, his work imbues a universal relevancy. What we’re left with is wondering: what do we do after the void is made visible? Scientists grapple with a simple dilemma in the hypothesis that Dark Matter (a virtually undetectable matter that neither emits nor absorbs light) constitutes a significant portion of the universe and this dark matter is responsible for the formation of the universe. Thus, in this theory, we are all born from an unseeable darkness. It’s the possibilities that emerge from the presence of such blackness that are so terribly exciting.

Black is the beginning. It is birth, the oneness of all, the expansion of consciousness in all directions. – Aldo Tambellini

Blackness has taken over contemporary philosophy, artistic practice, and filmmaking as a way to understand the world around us. Embodying horror, the post-apocalypse, origins and endings, the void has become a crucial signifier in processing a new way of being. Simply, the void is a possibility. And while black metal and cultural theorists dominate contemporary provocations for darkness, artist Aldo Tambellini has been exploring “Black” for over fifty years with his videos, paintings, and installations. The title of his exhibition at James Cohan Gallery, We Are The Primitives of a New Era, is perpetual. We are, as we were over a half century ago, in the process of becoming.

Aldo Tambellini’s We Are The Primitives of a New Era continues through October 19, 2013 at James Cohan Gallery in New York. Please visit the exhibition page for more installation images and a fantastic video of the piece. A screening of his Black Film Series screens at the Museum of Modern Art on October 18.