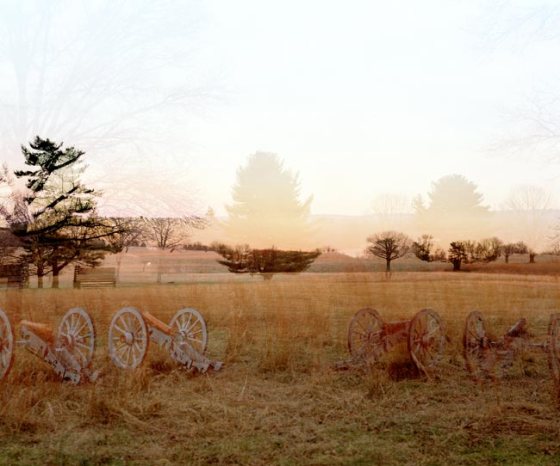 Part of an in-progress writing series related to an upcoming exhibition, On the Desperate Edge of Now, that looks at historical trauma and collective cultural memory in horror film and contemporary artists. These writings will eventually be published in volume four of Incognitum Hactenus and as exhibition catalogue. See previous post on Folkert de Jong here .

Los Angeles artist Heather Cantrell uses portrait photography as a means to construct and, ultimately, deconstruct singular and collective identity. Performative elements of her subjects as well as theatrical backgrounds function very much like a movie set in which the actions of her “characters” become exaggerated, solidified in an ever-static moment of the past.

In the very personal Corpus Battaglia (2004), Heather Cantrell set a cultural and personal stage as she identifies her familial history with the haunted battlegrounds of the American Civil War. The title itself references the “body” and “battle” and, presumably, the profound influence that one can have upon the other. As a photographic series, Corpus Battaglia entangles (our) national and (her) personal trauma by conflating public and private histories of the American South: the mausoleum-still landscapes of the Gettysburg, Antietam, and Valley Forge battlefields along with the iconic portrait assembly of the artist’s own southern “fore-fathers” (her mother’s four previous husbands).

Here, the still landscapes of Civil War battlefields resonate with America’s collective past, now hauntingly placid tableaus but once the site of bloody horror, while the images of war memorials imbue trauma as remembrance. The Civil War, pitting family against family with cultural and political values at stake, lead to the formation of the United States as it exists today. Cantrell parallels our country’s upbringing with the turmoil of her own by juxtaposing these landscapes with representations of her four fathers who, by default, also symbolize her mother. Her biological father Ivo is the only human figure in the series, her other fathers are depicted through objects – a house, a semi-truck, and most eerily, an urn (one of her stepfathers, Sam, tragically committed suicide).

Perpetually revealing one specific moment, photography itself is a conjuring up of a spectral past. Based on the historical usage of photography by scientists and occult practitioners to capture the presence of ghosts in “spirit photography” in the late 19th and early 20th century, the very foundational concept of the photograph can be seen as a spectral site, a place where the dead are re-born and re-placed back into the land of the living. Therefore, the idea of “medium” here is twofold: a physical medium (the photographic image) and spiritual medium (a channel between the living and non-living).  Corpus Battaglia is therefore a ghost, conjuring up America’s collective formative past when a nation was at war with itself along with the artist’s individualized experience of growing up; manifestations of America and a young American.

The title of this project (and its inspiration) is the first episode of Adam Curtis’ blindingly good BBC series called “The Living Dead.” It’s about how the past bleeds into the present, how it cannot be ignored, and how our memory of current/past events is a construction.

Dutch artist Folkert de Jong’s sculptural works are a grotesque and playful representation of international social histories. He establishes new narratives through the deconstruction of the past (referencing art history, warfare, colonialism, assassinations) assembled in figurative forms so that the viewer can recognize and remember our collective history.

His characters emerge through the time barrier like tarred ghosts, an evocation of negative energies brought forth to enlighten and entertain. These sculptures aesthetically ooze with attraction and repulsion; this push/pull creates a rupture that becomes our portal into an at once familiar and foreign struggle. Carnivalesque costumes, sickeningly sweet colors, and devilish grins are accompanied with barrels of oil, decapitated heads, and rifles. Humor is used to translate the horror and make it palatable. As the bad twin to characters in a Disneyland ride (think Haunted Mansion and Pirates of the Caribbean) De Jong’s figures urgently perform and unfold the history of human drama. These ‘tableaus’ are dropped directly into our present – the gallery, the museum, the studio are the background settings. Here is where time and space collapses as the past merges seamlessly into the now. These are not the desolate and isolated wastelands of Ed Kienholz, they are frighteningly alive ghosts beckoning us join their ‘danse macabre’.

As sheer material form, the sculptures are wholly hand-made and consist of Styrofoam, polyurethane foam, and occasionally clay. The usage of Styrofoam is significant beyond its easily modifiable form; it’s the same medium used in the film industry for architectural and stage design and it’s also produced by the same company who manufactures Napalm (that deadly chemical agent used prolifically in military operations). This subversive combination of fantasy (film) and reality (warfare) makes de Jong’s works resonant with power; an explosion occurs between representation and the acts being represented. And it’s within this space the horrors from the past emerge to haunt our present consciousness. 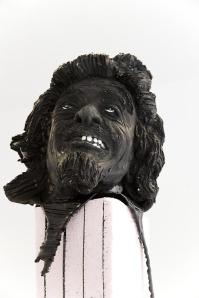 De Jong gives the viewer an arsenal of information. With just enough bit of candy coating, he coaxes us into our historical tales of terror that do not exist within the confines of film set but have been living amongst us within our everyday world. In his latest exhibition at James Cohan Gallery brings this forth via newer and older works including the large-scale and ominously fragmented Operation Harmony (2008). Titled after the contradictory name given to Canada’s 1992 military mission in Bosnia this sculpture references another political invasion, the lynching of Dutch political figures the DeWitt Brothers in 1672. Depicting five headless bodies strewn across the vibrant pink scaffold, only four heads (smiling, direct, sinister) look out at us. They represent men involved in various political assassinations and genocides. With title and source separated by hundreds of years we bear witness to the fact that “progress” often involves a sacrificial death. The conflation of these different historical events and geographical locations together with the present day makes for a curiously charged experience. These men are long dead but their stories have been re-animated.

A newer installation is The Balance II: Trader’s Deal 6-9  (2010) featuring a vignette of proud Dutch traders prance with their treasures of beads and whiskey from Manhattan’s Native Americans. Place in the front portion of the gallery and directly facing the street, these men beckon viewers to share in their spoils. However unlike the charm from the buccaneers

in Pirates of the Caribbean, we are more suspicious of these fellows and their inviting presentation of swindled goods. Other works like Business As Usual: “The Tower” (2008) the “No Evil” or “Morality Monkeys” remind us of our ability to look the other way and even perhaps America’s obsession with eliminating anything sad from our thoughts.

Seeped in the significant role art has played in the expression, sublimation, and manipulation of war and terror, de Jong continues the art historical tradition of bringing atrocities to light. In this sense he also acts like a skilled horror film director whose purpose is to manipulate reaction and produce affect. Tackling a myriad of historical traumas, like horror cinema, de Jong exposes universal truths to engage the viewer in a proactive remembrance.

Auschwitz. Hiroshima. Vietnam. These are names associated with specific places and occurrences [of historical trauma] but they are also wounds in the fabric of culture and history that bleed through conventional confines of time and space. – Adam Lowenstein ‘Shocking Representation’

One of my research strands on the influence of horror cinema and contemporary artists is looking at how artists manifest historical trauma within their work. By using the structure of the horror film as a guide and in considering Deleuze and Bergson’s notion of the now as an “ever shifting amalgam of past, present, and future”, I’m exploring the idea of a haunted present and possible recuperation seen in the representation of trauma in contemporary artworks.

This particular project (which I plan on realizing in exhibition form) is being called On the Desperate Edge of Now, titled after the first episode of British filmmaker Adam Curtis’ documentary series The Living Dead. In a visual mash up of archival footage, interviews, and appropriated images Curtis describes the relationship between history and memory in the context of World War II as both an individual and political construct that is never fully resolved – a ghost always haunting the present or an omniscient zombie walking the earth. This collision of the

past and the present that Curtis outlines makes for an explosively charged ever-present “now” particularly as it manifests itself into representational forms such as film and visual art.

Horror films are subversive and often entertaining social commentary reflecting the cultural and political issues relevant to the time period in which they are produced. Wes Craven’s Last House on the Left (1972), Tobe Hooper’s The Texas Chainsaw Massacre (1974), and Bob Clark’s Deathdream (1974) are all
reactions to the traumatic experiences, personally and culturally, of the Vietnam War. Many horror academics also

view newer films like Eli Roth’s Hostel (2005) as a reflection of America’s torturing of political prisoners at Guantanamo Bay. On the Desperate Edge of Now looks at how artists tackle similar histories through a knowing employment of strategies and signifiers found in horror cinema: humor, the family, death in life, societal repression, spatiality, allegory, and the corporeal.

Like their filmmaking counterparts, the artists I will be writing about attempt to confront history more than compensate for it. They are: Folkert de Jong, Heather Cantrell, Sue de Beer, and Gert & Uwe Tobias.