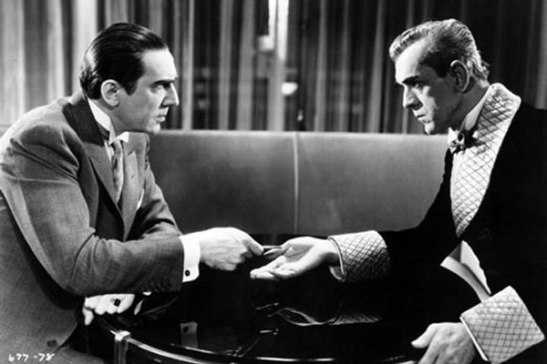 Supernatural, perhaps. Baloney, perhaps not. There are many things under the sun.

The displaced American in Europe; Henry James made a literary career out of it, so did Hemingway, and filmmaker Edgar G. Ulmer made one of the most brilliant conflations of the new-and-old worlds in his explosive 1934 film The Black Cat. Himself an émigré from the former Austro-Hungarian Empire working in Hollywood, Ulmer was all too familiar with cultural outsider-ness and he uses it to great effect when he features the misfortune that befalls two naïve Americans traveling through central Europe on their honeymoon.

This Black Cat is loosely based on Edgar Allan Poe’s “immortal” classic but, aside from the fearful presence of a cat that is black, it bears little resemblance to the short story. Instead, there is a complexly interwoven story with much at play: revenge, love, treason, psychological disorders, incest, Satanism, and architecture. But at the core are the eruptions caused by historical trauma caused by World War I with the film asking: what does war make men do? What is surviving or even living? Do free men make their own prisons? Who are the “good” guys? Ulmer’s film places together the past and the present, America and Europe cultures, and the traumatized with the innocent.

The story takes place in an imposing Bauhaus-inspired architectural structure that has been built upon the graves of a battlefield by Hjalmar Poelzig (played by Boris Karloff). The two Americans, Peter and Joan Allen, and a Hungarian psychiatrist named Dr. Vitus Werdegast (played by Bela Lugosi) wind up at the modernist house after a deadly accident in their shared car. But whereas the couple is taken off-course and enters a world unfamiliar, Werdegast is exactly where he intended to be – at the former site of war that he fought alongside Poelzig. Home. He is there to kill Poelzig as retribution for abandoning their battalion and for stealing his wife while he, loyal until the end, was a prisoner of war for fifteen years.

Of course, the war being echoed here is World War I (the Great War) that, with no doubt, had a significant impact on European culture and on Ulmer himself. “The force of their struggle symbolizes the shattered and corrupted humanity left in the wake of World War I. Their personal desire for death, then, is a natural extension of wartime patriotism, and duty: a desire for destruction adopted and internalized.”1 This intensely rich back-story embodies the The Black Cat and forms the underlining profound sense of loss echoed throughout the film; everybody has lost something and has been the walking dead for all these years, coping in different ways with the effects of the war. As a result, both men are mad and self-destructive. As Poelzig says shiningly, “Even the phone is dead here…even the phone is dead.”

In the battle of Karloff and Lugosi (it was the first time the two huge stars of the time had been onscreen together), it’s Karloff’s Poelzig who becomes the void in which trauma has been funneled into. Deeply guilty about his treason and about surviving, Poelzig is never-the-less a calculating and evil monster. He abandoned his team, stole his friend’s wife, killed her (and other women) while she was still young to retain her beauty, married his step-daughter, and is a Satanic high priest capable of human sacrifice. Living in his Gothic mansion, albeit a modernist masterpiece, he has isolated the outside world and remained living in his own contamination. So it is with little surprise at the vehemence in which Werdegast attacks his nemesis; he destroyed his life, the world destroyed them both. 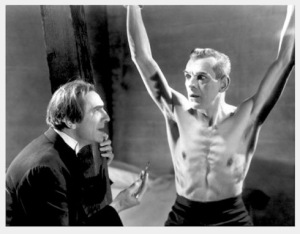 Considered the original “King of the B’s”, the mysterious Edgar G. Ulmer notoriously made his films on the cheap side (mainly do to the fact that he was blacklisted in Hollywood after marrying the already married woman of a Universal Studio chief). Along with The Black Cat, his films Damage Lives (1933), Bluebeard (1944), and Detour (1945) are an incredible combination of horror, noir, and German Expressionism, near perfect in their expression of loneliness, pain, and failure. In fact Detour is rightly considered one of the best films in cinematic history. What makes Ulmer films so special is how seemingly anachronistic they are, utterly daring in narrative, cinematography, and acting they are. It’s difficult to come to grips that these films were made in the 1930s and 40s! The Black Cat is particularly bold in showing a satanic mass (something more
culturally associated with the Anton Lavey 1960s) and Poelzig being tied up then flayed alive (who can come to terms with a shirtless Boris Karloff being skinned?!).

Brutal in its subject matter while inventive in its depiction, The Black Cat is, and should be rightly considered to be, one of the classic forefathers of horror cinema. The inclusion of two young Americans symbolizes the culture clash of the time and, as Paul A. Cantor writes in his essay The Fall of the House of Ulmer, “The Black Cat suggests that, unfortunately, Americans would not recognize a European horror story even if they wandered right into the middle of it.” But would we now? Through its self-reflexive (and explicitly meta-texual) combination of histories (personal and cultural) played out on the big screen, it is possible that as the horrors of past wars continuously haunt us through cinema, we are being forced to comes to terms and deal with these traumas still today.

Forty-two years ago horror legend Boris Karloff passed away. Best known for his role in James Whales’ Frankenstein (although I love him best in Mario Bava’s Black Sabbath) Karloff created an image of a complex, self-referential monster that has evolved throughout the decades. In honour of the man, I’ve included below some brief writing on the influence of Frankenstein in relation to Spanish filmmaker Iván Zulueta’s 1972 experimental film Frank Stein.

***
The absorption of the cinematic within Iván Zulueta’s work, Frank Stein and King Kong among them, reacts to the political and social constructs of the 1970s. This is why his version the ‘Frankenstein’ story as subject is so fascinating. Born in the 19th century in a novel by Mary Shelley (Frankenstein 1817), this monstrous tale has been told throughout the decades as a reflection on modern society. In the 1800s, the Frankenstein monster could be read as an allegory on the dangers of scientific explorations or fears of an expanding world. At the dawn of the new decade while the idealism of the 1960s waned, Zulueta’s ‘Frankenstein’ represents the confusion and lapsed innocence of this new world. That Frank Stein is filmed from a television broadcast remarks on the change in media consumption and how its accessibility began to blur the line between information and entertainment. Meaning can seemingly be projected onto this monster in any given era, thereby he perpetually symbolises the recycled, relevant, and rejuvenated spirit of the horror genre.

Read more on Zulueta on a short essay I wrote from LUX called The horror film and contemporary art.