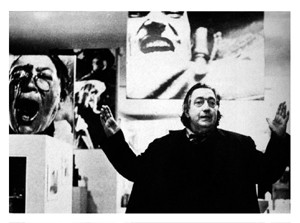 I’ve been inspired lately by Henri Langlois and the Cinematheque Francaise. His approach to the cinema was flawed in some areas (I would argue for more curation) but was instrumental not only to the history of showing, archiving, and promoting film but how we continue to process film. Decades after his death, Langlois is challenging me – a contemporary art curator – to re-think and re-shape how I approach my programming. And to do so, always, with passion.

Never forget, you’re always programming for ten percent of the audience. Nothing matters as long as you’ve made those ten percent happy.

Haven’t you noticed people going through art museums? They come into a room, see a picture, walk over to read the label, discover who the pictures is by and what its title is, and then move on. They have read: they know. I don’t want that sort of thing in my museum. I want people to look at everything, really look, and if there are no labels then they have to try to figure out what the object of photograph is. That is the difference between and illustrated book with its captions and a museum: it’s not important that people should know exactly what still came from which film; the whole museum has been planned as an almost autonomous living history of the cinema.

Excerpts from the book A Passion for Films: Henri Langlois and the Cinematheque Francaise by Richard Roud.