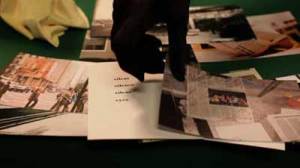 As part of my The Art of Fear post on Dario Argento’s Profondo Rosso, I wanted to highlight LUX’s Thinking Through Cinema (Deep Red) that used the film as the basis for commissioned artworks (film, video, and sound) at last year’s Artissima Art Fair.

For Thinking Through Cinema (Deep Red), LUX’s project at this year’sArtissima Art Fair in Turin, Argento’s film becomes a stand-in for cinema as a whole – a starting point from which to explore the differences between film (as a physical medium) and cinema (as the cultural, architectural and social space in which film has traditionally been experienced).

Six commissioned artists – Meris Angioletti, Juliette Blightman, Claire Gasson, Torsten Lauschmann, Nathaniel Mellors and Emily Wardill – will each present their ‘version’ of Profondo Rosso, using Argento’s film as a source text but perhaps without showing a single frame of the original. The artists’ projects will be presented over the course of the fair as part of a rolling programme of timed events, hosted in a specially constructed space modelled on a cinema auditorium, framed within the fair’s ‘House of Contamination’ strand. Thinking Through Cinema (Deep Red) offers an opportunity for artists to completely reimagine cinema – its history, its limits and its untapped possibilities – from the perspective of both creator and audience.